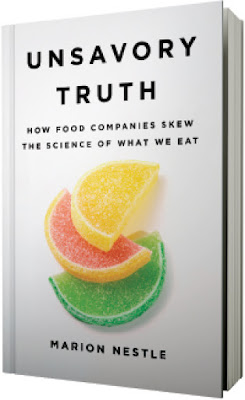 But first, definitely a disclosure. It was reading Marion’s 2002 Food Politics that started me on my own path of nutrition related public health advocacy, and in the ensuing years, I’ve had the great pleasure of meeting her, both online and in person, and I value her friendship and counsel. I was also a bit flabbergasted to learn that I had a small part to play in Marion’s decision to write Unsavory Truth, as in the afterwords she notes that it was the exposé of the Global Energy Balance Network (in which I played a small role and where I receive mention in Unsavory Truth) that triggered her interest in writing. Consequently there’s zero question I’m biased, both personally and professionally, and I’ve no doubt, she’d approve of me disclosing this before my reviewing her work, which was sent to me freely by her publisher, which explores the many conflicts of interest that exist between the food industry and nutrition professionals.

Unsavory Truth: How Food Companies Skew the Science of What We Eat, is Marion’s take on how, and why, the food industry works with researchers and health professionals. She takes us on many different conflicts of interest tours, from nutrition research as a whole, to sugar and candy, to meat and dairy, to “health food“, Coca-Cola, advisory committees, the American Society for Nutrition, to nutrition education and dietetic societies.

Overarchingly, Marion sees industry’s response to criticism of its involvement as following the playbook set by tobacco which sees them:


“Cast doubt on the science

Use the courts to challenge critics and unfavorable regulations”

And she laments the fact that nutrition, unlike medicine, doesn’t seem to take its conflicts of interest as seriously, “


Decades ago, medical professionals recognized the distorted effects of drug company practices, measures the distortions, and took steps to counter them. Medical journals required authors to disclose financial ties to drug companies that might profit from the results of their studies. Medical schools banned drug companies from marketing to students. In 201, Congress required drug companies to disclose payments to physicians. Nothing close to that level of concern, scrutiny or action applies to food-company efforts to engage nutrition professionals“

The aim of the food industry is self-evident and non-indictable. It’s profit. And there are many ways for them to invest in research and partnerships to help in that regard. Citing the work of Lisa Bero and colleagues, she explains that when it comes to research, food industry funding can,

“focus on single nutrients, ingredients, or foods rather than on interactions or overall diets. They can compare the effects of single foods by contrasting diets that include them to diets that lack them. They can design trials without randomization, blinding or appropriate comparisons. They can focus on obvious or irrelevant effects. And they can give a positive spin to results that show no effect or fail to publish unfavourable results.“

And then by way of examples of each, demonstrates these are anything but theoretical risks, including studies where though the conclusions are valid, like for instance, if compared with sucrose, and when neither are consumed to excess, that the slightly higher amount of fructose in high fructose corn syrup isn’t likely to make much difference to health, are designed to prove forgone conclusions that can be spun by their funders and are more apt to be classified as marketing research than basic science.

Marion’s also quick to note that,


“industry funding does not inevitably bias a study, although it does suggest that the research question and interpretation require more than the usual level of scrutiny“

Looking to guideline committees and dietetic organizations, the food industry is again represented in ways that require more than the usual level of scrutiny. In 2015, 10 of the 14 members of the Dietary Guidelines Advisory Committee consulted for, or received grants from the food industry, while the food industry also provides direct sponsorship and support for the works of the Academy of Nutrition and Dietetics (AND), and other dietetic organizations. And here the real question is “why?“, or perhaps a slightly more nuanced, “is that really necessary?“. Regarding AND for instance, Marion reports their own documents note that the cost of removing industry funding from their organization would cost just $17.17 per member per year.

Finally Marion ends with some thoughts on what to do about this mess, and while she covers a number of different options and initiatives, the one she sees as best would be, “an industry-wide program for research paid for by a mandatory tax or levy” whereby all food and beverage companies with sales over some pre-determined level, would pay a fee in proportion to sales revenues which in turn would serve to fund research and programs related to nutrition. Realistically though, she also notes that the likelihood and feasibility of such a system is “zero“, and then encourages health professionals and organizations to at the very least, review their policies and to attempt to put some in that safeguard members and individuals, while asking all of us to remain vigilant and aware of the fact that in no way does disclosure alone always suffice.

Like all of Marion’s books, Unsavory Truth is fascinating, and wherever you fall on the spectrum of worrying about food industry conflicts, a worthwhile read.